Here I share a little of the history and some personal tales of the Christingle and the Moravian Star.

The idea of the Christingle began in 1747 at a German children’s service. To illustrate his words the minister handed each child a candle tied with a red ribbon.

The symbolism gradually developed, and today in the Moravian Church in the British Province, the Christingle consists of an orange, representing the world, with a lighted candle to represent Christ, the Light of the World. Nuts, raisins and sweets on cocktail sticks[1] around the candle represent God’s bounty and goodness in providing the fruits of the earth. Red paper, forming a frill around the base of the candle, reminds us of the blood of Christ shed for all people on the cross at Calvary.

At Fulneck church we normally have the joy of making nearly 250 Christingles and welcoming a congregation that fills the church. Everyone holding up a lit Christingle is indeed a beautiful sight. 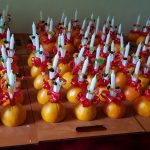 I asked Br John McOwat about his memories of Christingle services. Here he shares one from his time as a pupil at Fulneck school and then from the time he and Beth served in Jamaica.

My first experience of Christingles when about ten years old was in the Boys’ School in the period of rationing immediately after WW2 when a Christingle consisted of a candle and frill stuck in a ROCK BUN which we were told should have been an unobtainable orange! The lighted candles created a memorable impression.

We had ten Christmases in Jamaica and never had a Christingle Service. We could have had the oranges (it was the season!) but safeguarding them against ants when cut and prepared would have created a huge problem – and then the danger of candle flames being waved about ……….

What we did have very often were Christmas concerts which were a bit like talent shows and were used as fund raising opportunities. Members would offer to sing or recite and be charged so much per item. Then the congregation members would offer to pay for an encore or even sometimes they might offer money to have the item stopped because they did not like it!   I do remember being told about an item that had reached verse 26 being stopped!!!

Thanks John. Perhaps you have offered us a new fundraising idea for Fulneck.

The Moravian Star was first created by a teacher at the Moravian School in Niesky, Germany. He used the star to explain geometry, as it has 17 quadrangular and 8 triangular points. The mathematical name for it is Rhombicoctahedron; I challenge you to say that quickly after some mulled wine.

One of the graduates from the school, Pieter Verbeek, opened a bookshop in 1880 and used the star to decorate his shop. His son went on the create a factory to make the stars and they sold all over the world until the second World War. The factory was destroyed and then taken over by the East German government. It was returned to the Moravian Church and is now once more producing stars[2].

I had mentioned the Star to my German friend and told him I was hoping to buy one. So, imagine my surprise when I received a parcel from him – a star made by a friend of his mum. The tradition lives on and this star will, like previous years, shine out from our front window. Below we have the impressive star that shines at Fulneck. 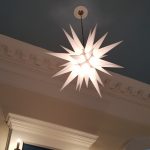 [1] Or something less dangerous! Traditionally, goose quills were used.

[2] https://mybrilliantstar.com/collections/all-products At this site you can purchase the star and find out more about its history and production.